Bill Martin reviews the ‘Therapist’s Edition’ of TOUCHING THE CLOUDS

My attention was drawn first to the mellifluous flute playing, which tends to improvise around pentatonic scales, and then to the sensitive, crystal-clear solo guitar of Richard Bolton’s Dawn Clouds, Dusk Rain which opens Side 1, and fades into Nimbus, a relaxing flute improvisation over a slow, rhythmic keyboard figure. Clive Williamson’s ability to evoke a whole range of emotional effects is the band’s foundation. His title track has a timeless, dreamlike quality which links many of his pieces on this album, and here, long sustained sounds fade in and out of each other, punctuated by delicate metallic sounds; it is as though we are in a small boat, drifting slowly in a strange place and watching things appear and then recede into the mist. 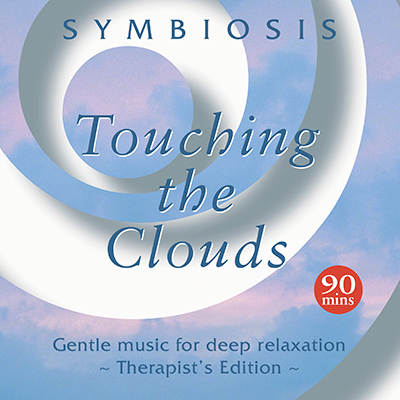 Bill Martin reviews the ‘Therapist’s Edition’ of TOUCHING THE CLOUDS

My attention was drawn first to the mellifluous flute playing, which tends to improvise around pentatonic scales, and then to the sensitive, crystal-clear solo guitar of Richard Bolton’s Dawn Clouds, Dusk Rain which opens Side 1, and fades into Nimbus, a relaxing flute improvisation over a slow, rhythmic keyboard figure.

Clive Williamson’s ability to evoke a whole range of emotional effects is the band’s foundation. His title track has a timeless, dreamlike quality which links many of his pieces on this album, and here, long sustained sounds fade in and out of each other, punctuated by delicate metallic sounds; it is as though we are in a small boat, drifting slowly in a strange place and watching things appear and then recede into the mist.

We are taken to The Crystal Cave, an enchanting place with tinkling wind chimes, drones and swirling chordal sounds to comfort and reassure us. Once again there is this sense of all kinds of images which remain just out of view, but which we glimpse fleetingly before they disappear again. A treat for the head, heart and ears!

Lawrence Ball makes a guest appearance (on the extended ‘Therapist’s Edition’ of the album only) in his Spring Light, a thoughtful piano piece with some subtle, minimalist synthesiser embellishments. His careful use of dissonance and silence draws us into this piece, which fits perfectly into the album’s style. Further delights are Richard Bolton’s Pale Clouded Yellow, an effortless electric guitar solo, and Dreamtime (After the Storm), which includes Ashley Drees on cittern.

I love this album and concur whole-heartedly with the description on the insert, ‘90 minutes of music to calm the mind and soothe the spirit’.

“I was absolutely enthralled by the beautiful music” Customer, Kent… about Touching the Clouds

“Of all I’ve heard, Touching the Clouds is still my (and my clients’) favourite CD” Holistic Practitioner, Glasgow

Here is truly perfect music for deep relaxation and holistic therapies. Compositions that hold the attention with their superb instrumentation yet soothe and calm make this recording truly magical.

This enchanting spirit-captivating, freeing music begins with Dawn Clouds, Dusk Rain and acoustic guitar: The flute enters soon. With a touch of reverb now and then, the deep soothing flute tone weaves a tapestry for Saint Grace herself, while evenly strummed guitar chords provide the woof. Nicely reminiscent of Paul Horn’s flute in the Taj Mahal, a simple chime plays in concert as duo. As the recording proceeds, human voices punctuate a rhythm assisted by high fluttering chimes for a brief harmonic divergence fades out as the flute returns to hint at two well known melodies masterfully combined. Then finger cymbals, synthesized string, vibes and glass chimes. It drifts lazily and peacefully along for quite a time then quieting to one central tone, then adds a fifth and expands slowly. Some marimba notes conjure drops of water off a roof in the quiet after a rain.

In the Hawaiian culture, clouds were observed by cloud kahunas who read them for instruction and guidance. We can look to Touching the Clouds to relax mind and body. Highly recommended.

“An ideal tape for healing, yoga and relaxation. This innovative and evocative music reaches deep within the soul of the listener to soothe and relax. I can guarantee that you will not be disappointed with this tape as it is probably some of the best ambient/new age music around at the moment.” (Dave Bird, New Age Trader)

Touching the Clouds on CD – from Kindred Spirit

Touching the Clouds by Symbiosis (72 mins)
This album was nothing like I expected from the CD inlay card. Symbiosis have created beautiful music; delicate and sparse arrangements of flutes, keyboards and acoustic guitar over a fine soundscape backdrop combined with space and atmosphere which both become instruments in themselves. Touching the Clouds, the title track, is a fine example of the 23 tracks. Richard Bolton, John Hackett and Clive Williamson, along with a few guests, have created something special and original with a stunning display of subtlety and creativity; an intriguing, original release.

“I loved the simplicity, the naturalness of it. I found it very flowing; soothing very gentle. If I was trying to make up my mind what a New Age track would sound like, this would be the type of track.” (Kolinka Zinovieff ITEC, MTI. – Holistic Massage & Cranial Osteopathy)

After the interval came Symbiosis. Musically, this was the highlight of the evening. Clive Williamson (flute, vocals etc.), John Hackett (flute) and Richard Bolton (guitar) made up the group. The space and textures of the music were breathtaking. Even a version of Jimi Hendrix’s The Wind Cries Mary was stamped with their style. The final piece, by John Hackett (‘Freefall’), was the best. It featured Clive playing keyboards to a beautiful melody from the flute with acoustic guitar notes weaving in between. Every piece of music came over clearly and simply, showing Symbiosis’ mastery of ‘the spaces in between’: Excellent. 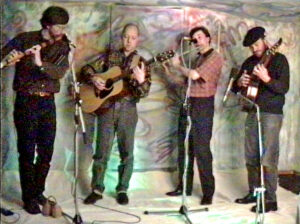 Hay-fever and a cold combined did not put me in the ideal state of mind to enjoy a concert, but it says much for Symbiosis that I left Rudolph Steiner House feeling a great deal better than I did when I arrived. Their performance has a relaxed professionalism and a variety that so many New Age concerts lack – no doubt due to the fact that Symbiosis extend their musical range far beyond what is usually understood by the term “New Age”. Jazz standards rub shoulders with Hendrix songs and the group’s original compositions – of which Dreamtime and Crossing the Silver Sea from their new album Touching the Clouds were particularly evocative.

Between them, the four members of Symbiosis play electric, acoustic and Spanish guitars, flutes (including ethnic flutes), cittern, mandolin, African pot – and other percussion, wind synthesizer, keyboards and voice, and all are exploited to the full to give colour and variety to the music. Nor are they afraid of rhythm, moving easily from the tranquil Wrapped in Evening Mists to the Latin American rhythms of Layers of Shade, and ending with a kind of eastern funk (entitled Sesamum Seed and Rice) which had the audience shouting for more – and this after two hours of music! How many New Age groups can you think of which can sustain an audience’s interest and enthusiasm for even half that time?

Symbiosis are calming, uplifting and exhilarating by turns and, above all, musical: John Hackett is a classically trained flautist; Richard Bolton (guitars) is also classically trained (on cello!) and Ashley Drees is an accomplished folk musician, playing cittern, mandolin and percussion. Clive Williamson, the group’s leader, is aptly summed up in the words of the Todd Rundgren song that he sang superbly: “I was born to synthesize”. Somehow he takes all this diversity and weaves it all together.

On this occasion, extra colour was added – both musically and visually – by the striking figure of Maloviere, performing a short set of his own on recorders, violin and tsimbala to great effect, and joining the group on violin for the finale. Spread the word; and see them if you can. Symbiosis are exceptional.