There can’t be many places in the world that offer the huge range of climates and natural environments to be found in New Zealand. Snow-capped mountains, glaciers, rolling plains, dense forests and hundreds of miles of coastline have all been crammed into two islands only a little larger than the British Isles.

New Zealand is thinly populated so – theoretically – it makes an ideal place to record sound effects. You can escape the sounds of traffic and aircraft with relative ease, and quite apart from the stunning scenery, it’s a captivating place to record because of the wealth of bird-life and its unusual range of geo-thermal activity like boiling mud pools and hot-water streams and geysers.

So, in the summer of 1995/96, armed with a tiny Sony DAT recorder and several microphones, I made the 3000 mile journey to New Zealand to complete a recording project for my own group – Symbiosis – and the BBC Sound Archives.

These recordings are now available on the album New Zealand Naturally. 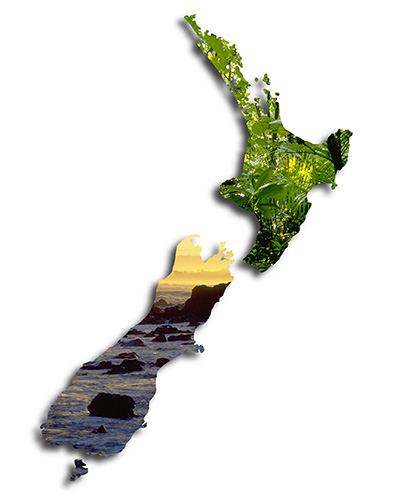 So I was off: into the bush and climbing steep forest trails to hear the strange calls of New Zealand’s indigenous birds like the tui, saddleback and bellbird; clambering over rocks to record the Pacific ocean; through trenches to see yellow-eyed penguins; and getting sea-sick in pursuit of Sperm Whales. The first difficulty I encountered was battery life in the D7 DAT recorder, which only ran for about an hour on four long-life AA cells when monitoring through headphones whilst recording. Mercifully this was cured by another Clarity systems add-on: an external battery box which acts like an AC adapter, and easily powers the D7 for about 20 hours on one set of four type D cells.

Predictably with the range of outdoor environments and locations, wind noise presented the biggest problem, but the Rycote Softie with its ‘hairy covering’ did an incredible job of shielding the ECM 959 stereo microphone, damping all but the strongest sea breezes. The Softie’s pistol grip was comfortable to hold, and did a good job of cushioning the mic from any handling noise too. Two unprotected Shure Beta 58 mics often had to be positioned at ground level to reduce the chance of wind noise, and sometimes I made recordings in the knowledge that heavy editing would be needed later to remove unwanted effects. Fortunately the Shure mics / Clarity pre-amp combination suited recording in the bush, where there was usually less wind to worry about. 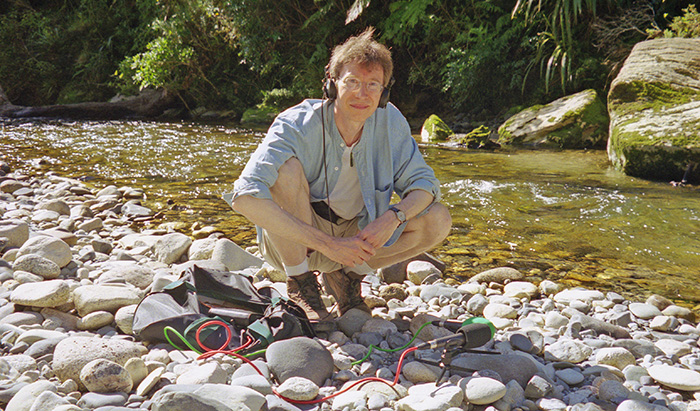 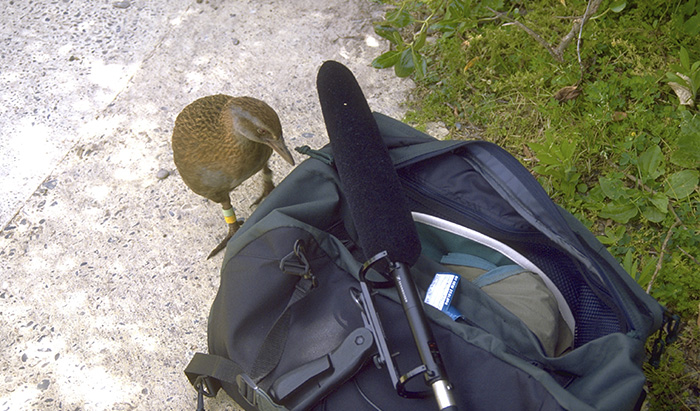 Travelling light – and on a budget – you don’t always have the right equipment for every eventuality and, needless to say, nature isn’t always on your side either! My first encounter with dolphins at Paihia, in NZ’s beautiful northern Bay of Islands, was less than successful. The pod of these mammals that I tried to record there was sleepy and inactive, and noise from the aluminium hull of the boat swamped any sounds they were making. A more controlled attempt at Marineland in Napier was better, but I think the dolphins were frightened by the furry Softie, and would only make underwater echo-locating sounds, which I recorded by way of an ECM 150 mic dropped into their pool in a dentist’s rubber glove, and weighed down with a spoon borrowed from the motel.

The height of my inventiveness came when I had to tie the ECM 959 to a hotel’s broom handle to get close enough to record a pool of bubbling mud in Rotorua: the heart of NZ’s thermal activity. The sound quality was really good, and later I was able to edit out my muffled choking on the ‘bad eggs’ whenever the wind changed (and pick the dried mud out of the Softie’s fur: yech!). But nothing could protect me from the shower of guano from some juvenile korimako (bellbirds) I was recording in the trees overhead on Tiritiri Matangi Island. So it goes. 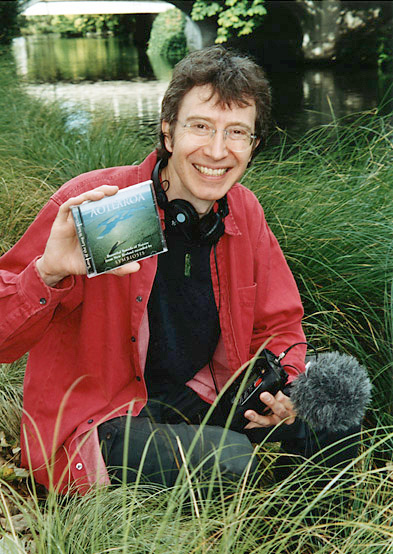 I needed to find the smallest, lightest, and most reliable equipment for the trip. Here’s what I took, and why:

One factor in choosing the equipment was that it all used AA batteries and had compatible connections. Each item was as light as possible: Sennheiser’s K6 + ME67 rife mic capsule combination weighed only 130 grams, and the DAT recorder just over 1lb. To cover every eventuality, I took a pair of old Sony ECM 150 lapel mics, and I was already travelling with a pair of Shure Beta 58s for P.A. use.

Sennheiser’s rifle mic generally performed very well, giving a tight pick-up of the sounds of individual NZ parrots like the kaka and kea, and having a high output which got round the pre-amp noise in the recorder without the need for any extra gear. The ME67 mic capsule added some brightness, which suited some effects and could still be filtered from others. I soon found myself wishing for a second Sennheiser to gather stereo effects at a distance. A pair of ‘shot-guns’ would have been very useful for some of the bush recordings of birds, and much of the geo-thermal activity, which is difficult to get close to without falling in to something hot and wet, or getting a facefull of sulphurous fumes! The Sennheiser’s ‘pro’ velour windshield proved too refined for many of New Zealand’s winds, and I wished I’d invested in a full basket shield with a hairy cover for the one mic I had!

One other piece of equipment wasn’t available when I left England, but was later to prove to be the ace in the pack! Clarity Systems, a relatively new company based in Southampton, promised to ship one of their new high-gain microphone pre-amps out to me in Auckland so that I could try it out ‘in the field’. The plan was to use it with the ECM 959 to overcome the inherent noise in the D7’s built-in mic pre-amp, which is fine with loud sources, but becomes problematic when the gain control has to be set between about 8 and 10. The Clarity pre-amp gives 50 to 60 dB of gain, depending on the source resistance of the microphones, and feeds directly into the line input of the tape machine. It is specially designed to work with dynamic mics like the AKG D202 and the Beyer M201, but can also be adapted to work with higher output electret mics by adding in-line pads. That was how I hoped to use it once I collected the equipment in New Zealand. In the event, the increase in noise performance seemed marginal with the ECM 959 (probably because the source impedance was wrong) but was stunning when I tried connecting the pair of Shure mics directly to the pre-amp. The two mics were more cumbersome, and extra weight to carry, but the results certainly justified the added inconvenience. Besides, the pre-amp was only the size of a cigarette-packet, so that was hardly a burden, and the “super-hearing” results were amazing!

Recording in New Zealand was a voyage of discovery about both the equipment and myself! You have to devote a lot of time, energy and patience to field recording to bring home good results. Luck plays its part, of course. I drove on miles of unmade road and climbed through thick brambles hoping to record one of New Zealand’s loveliest-sounding birds – the Kokako – only to get caught in a thunderstorm. I never heard a Kokako, but the storm recording sounds great!

Postscript: Returning to NZ in 2017 I revisited many of the locations including Mapara Reserve, and that time I was rewarded by being able to both hear and see a Kokako! The resulting recording appears on New Zealand Naturally. 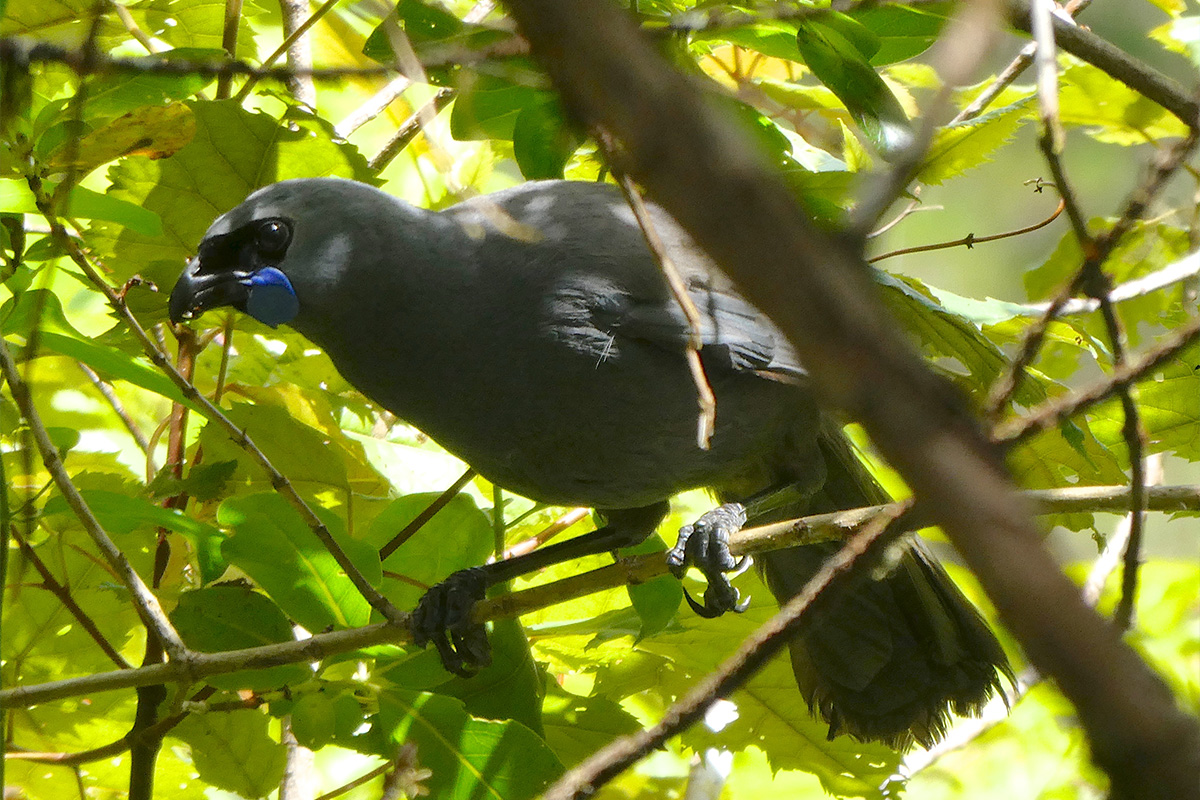